We serve clients in the state of California and throughout the United States. When the federal government and it's agents come knocking and everything is on the line, there is no question that you must find the best federal criminal defense attorneys.

In Los Angeles federal courts, our track record is unmatched. We have successfully handled countless federal criminal cases over many years of successful criminal defense practice in Los Angeles. Attorney Ronald Hedding decided to stand firm in defense of those clients who must guard their reputations, rights and freedom all costs. Read our message and review our credentials and then come in for a face to face consultation in absolute privacy and decide who is the best.

If you have a federal criminal case in Los Angeles or anywhere in the nation, you must sit down with us face to face and allow us to educate you on how the federal criminal defense system works and design a plan to put you back on the road to a normal life. There are several criminal offenses that can be charged in federal court.

When a federal prosecutor takes on a case, the situation gets more serious, and the consequences of a conviction get harsher. The federal criminal lawyers at the Hedding Law Firm represents clients in federal federal cases nationwide. 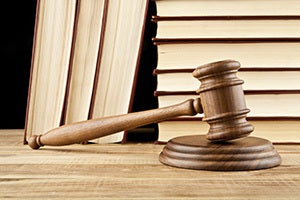 Federal prosecutors, known as Assistant United States Attorneys (AUSAs), are tasked with the responsibility of enforcing federal laws and prosecuting those who break them. They will typically meet with federal agents and review the evidence gathered in a federal investigation.

If they believe there is enough evidence to prosecute someone for a federal crime then they will usually file a federal indictment with the United States District Court that has jurisdiction over a particular federal case. The prosecutors and federal agents will then work hand in hand in prosecuting a federal case in Los Angeles and elsewhere in the country.

Federal judges are primarily responsible for sentencing an individual who has committed a federal offense. A federal judge must consult the Federal Sentencing Guidelines before sentencing someone in a federal case.

The probation department, assistant United States attorney, and you federal criminal defense lawyer will all file sentencing position papers regarding what each believe an individual charged with a federal crime should receive. Ultimately, it is up to the sentencing judge to make the final decision and up to us to point out any and all downward departures.

If you feel that you are under investigation by the feds you definitely want to get an attorney involved with your case immediately.  Never a good idea to try to handle it yourself.  Now's not the time to pinch pennies and not hire an attorney immediately.

Basically, pre-indictment intervention has to do with before the feds indict you which is their filing document where they're filing criminal federal charges against you.  You can intervene and you can use an attorney to either investigate the case to show that you're innocent, or to investigate the case to try to get information on your behalf to either mitigate or reduce the charges.

Another thing your attorney can do is talk to the prosecutor involved with the case before an indictment is filed and see if anything can be done to avoid an indictment, or at minimum, to be able to represent your interest while the United States Attorney is trying to figure out exactly how they're going to handle your case.

What they're going to do — whether they're going to arrest you in front of your friends and family or whether you might be able to just turn yourself in at a designated location, then your attorney can argue to try to get you released without you being in custody for a significant period of time.

Realize in the federal criminal system, once you get arrested there's a possibility you could just be detained without having the ability to post a bond.  They don't have bail bondsmen in federal criminal cases, so you definitely want to get an attorney before you're indicted to try to make some moves on your behalf so you can end up with the best possible result.

I've handled a lot of cases pre-indictment, dealing with the prosecutors and letting them know my client's position right from the beginning.  This is an important thing to do and it can benefit a criminal defendant in many different ways.

So, if you're being investigate or you suspect you might be being investigated before you get indicted, pick up the phone.  Make the call.  I've been doing this for 26 years.  I'm sure I can help you strategize what you're going to do moving forward, what moves you're going to make, what I'm going to do on your behalf with the prosecutors so you end up with the best possible result in your federal criminal case.

Federal criminal conduct usually falls under several categories and many are similar to those found in State Courts. Some of the most common federal cases we have dealt with include the following:

Federal drug offenses normally involve selling, manufacturing or distributing controlled substances, such as cocaine, methamphetamine or other illegal substances. Most federal drug offenses involve the transportation of narcotics over state lines. We handle cases of drug smuggling and drug trafficking that often involves transporting the drugs from one state to another in a motor vehicle or other means of transportation.

Child pornography and internet sex crimes are federal offenses that typically involve trafficking, selling, distributing, or possessing child pornography through the use of computers and the internet. Due to the fact that using a computer and the internet are almost always a crucial factor in the case, your federal defense attorney has to have experience in dealing with these type of cases.