What to Do If You Are Facing Federal Drug Charges?

This is a big issue that I've had to deal with over the course of the last 26 years that I've been a federal criminal defense attorney.  A lot of people or their families have been arrested and they're in custody and they're trying to find a lawyer.

Sometimes, they are even the actual person themselves who's been charged or arrested give me a call and we have to figure out what we're going to do, step-by-step to best deal with your federal drug charge.

Sometimes you can't even get to an attorney right away, so you have to make decisions based on the information you have.  What I've tried to do here is give you a step-by-step and cover a lot of the main key issues that come up in these federal drug charge cases.

The first thing to keep in mind is that while everything is still alive and going on, you really don't want to give any statements to law enforcement. Whether it be the FBI, Secret Service, Drug Enforcement Agency — any of the branches of federal government.

You don't want to be in a position where you're helping the government.  So, that's number one to look out for — that is to keep your mouth shut and don't say anything that could incriminate you.

What you really need to do is to hire an attorney right away to act as a buffer between you and law enforcement so you don't say or do anything that ends up coming back to haunt you and being the primary evidence in the federal drug charges that are pending against you. 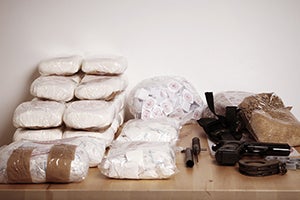 The next thing that I think you should do is consult with an attorney because you don't want to start making moves, doing certain things as you try to help yourself in a federal criminal drug prosecution that again may later come back to haunt you.

In other words, your own actions can come back to haunt you.  Maybe you move money.  Maybe you go to move drugs or guns so the police can't find them, meanwhile the police are watching you, they're surveilling you.

Maybe you get on the phone and they have your phones or the people that you're talking to wire tapped and now you've put yourself in a position where you're talking and you're giving them more incriminating evidence and you don't even realize it.

So, before you make any moves, before you do anything, consult with an attorney.  Hire that attorney if you feel confident with them and let them guide you through the rest of what's going to happen.  A lot of times I, as a federal criminal defense attorney in a drug case, I can get right to the prosecutors.

I can talk to them about whether you're a target or not or whether you're just a potential witness in the case that they're investigating, and I can also help make things go easier for you.

There's something said for avoiding being arrested and taken into custody, being embarrassed in front of your family or at your work, and your attorney can just get on the phone and prevent all that from happening.

If you're going to have to appear for example in federal court, you're going to have to deal with the federal authorities.  Your attorney can be the one who calls the prosecutor and sets things up, so it goes smoothly and easily for you instead of very difficult.  So, that's another thing you need to do — get your hands on a federal criminal defense attorney.

Reviewing The Evidence in Your Federal Criminal Case

I stand at the ready.  You can call me.  I have myself, my father who's an attorney and I have another very seasoned attorney.  But I'm really the main one who is going to handle your federal case, so you're going to be contacted with me pretty quickly.

First, you'll probably talk to one of my attorneys or my office manager and then you'll end up talking to me either over the phone virtually, or we can meet face to face so we can deal with your federal drug case.

That's going to dictate what the next steps are and obviously, that's going to be coordinated through you and your attorney and your attorney dealing with the judge, the prosecutor, going through whatever evidence they claim they have against you, educating you on that evidence, and then you sit down and make some good informed decisions.

So, if you or a loved one has a federal drug case pending or you're even being investigated for federal drug charges, pick up the phone now.  Call us at (213) 542-0994.  I stand at the ready to help you.

Related:
Will I Go to Prison If Charged with a Federal Drug Case?