I make all kinds of family circumstance arguments and sometimes I have been successful, but one of the biggest problems is usually everybody has family circumstances, so if they started to liberally give out this department and lower people's sentences just based on that, they'd have to do it in a lot of different cases.  So, judges are pretty darn stingy when it comes to allowing family circumstances to be able to be utilized in order to give levels off a particular sentence.

An example where I've seen family circumstances used effectively is, let's say that a mother is the only parent alive for a young child and she commits a federal crime and her defense attorney argues that because the child needs the mother, there's no father around, that it's important that the mother is there.

Obviously, you don't want to bring the child into federal prison, so that's probably a pretty good argument for a chance to get the family circumstance departure and get some level shaved off your federal sentence.

But, even in that circumstance, I can see the government arguing and even the court saying if there were grandparents or other individuals available to watch the child, that might block the judge from giving the family circumstance departure.

Out of the Ordinary Circumstance 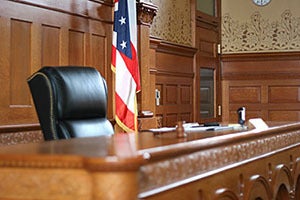 You need  something different than what most people have, because realize, when they're looking at this family circumstance argument, they're comparing your situation to other families and other people and if it's the same and everybody has that family circumstance, you're probably not going to get the departure.

Sick relatives are another example.  You have an inform father, mother, brother, sister, wife then you might be able to argue for family circumstance.

The bottom line is this, if you do have a family and it would hurt the family — let's say financially for example — if you were put in federal prison for a long time, you're attorney is certainly going to put it in the argument.

They may not give you levels off for that specific argument, but that certainly could be looked at in the big scheme of things by the judge and there might be some other circumstances in addition to the family circumstances that add up to giving you some levels off on your sentence, giving you a low-end sentence of the guidelines instead of a high-end sentence of the guidelines.

So, certainly your family circumstances is an important factor for your attorney to vet, to talk to you about.  The probation department does a pretty good job in federal criminal cases of getting information related to your family and your loved ones.

They check your house.  They go into your background.  So, they're usually a nice source to be able to get that information in front of the judge, and of course, your defense attorney can take that information and their sentencing position paper and use it to get you the lowest possible sentence.

But, they're also looking at what you did and how you impacted the community, how serious your conduct was and what the right punishment is.  So, these judges have a lot of discretion.  They also have a lot of authority.