Importance of the Judge in a Federal Criminal Case

I would say when you're weighing everything when you're thinking about your case and exactly how you're going to handle everything, the judge is probably the most important component of the case. The reason I say that is because in the end if the person is convicted or if the person pleads guilty, the judge is going to be the one who decides exactly what the punishment is going to be.

That includes how long they're going to spend in custody, what type of restrictions are going to be placed on the person.  Also, even leading up to a plea or going to trial, the judge is going to rule on any pre-trial motions. Our federal criminal defense lawyers are providing a review below.

Judge Rules on Motions and Presides Over Trial

So, the judge is crucial and knowing who that judge is, what their tendencies are is important because you need to have a really good feel for how you're going to handle the case and one of the big factors is going to be that judge because like I said, the judge will rule on any motion that you file and the judge will be the one who presides over the trial.

If you end up getting convicted or if you end up working out a plea bargain in a deal with the prosecutor, the judge ultimately will be the one that sentences the person.

It's interesting in federal cases, this just gives you the idea of the power that a judge has in a federal criminal case.  When a person goes in and works out a deal with the government usually through a plea bargain.

Then, that plea bargain is presented to the judge, it's filed by the government and then the clerk will get a hold of both parties and it will be decided exactly when the defendant is going to go into court to take the plea.

What ends up happening is, the judge will go through a whole bunch of questions to make sure, obviously, the person understands what they're pleading guilty to and what they're agreeing to.  But also I see almost every single judge say to the defendant, has anybody promised you what your sentence is going to be in this case?

And if the defendant doesn't say, no nobody's promised me anything then there's going to be a problem because the judge is going to say, wait a minute.  How can somebody promise you what your sentence is going to be when I'm the one who decides and I haven't talked to you?

See, a lot of attorneys, unfortunately, must be telling their clients certain things like, you're going to get this much time if you plead guilty, and the reality is, the attorney does not know that for sure.  All the attorney can do is know what the guideline range is for what the person plead to.

So, the attorney is going to be doing simple arithmetic and simple figuring based on the plea agreement in order to tell the person, okay you fall within this range. 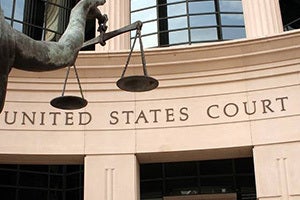 So, there's a bunch of different factors that these judges look at and what I've noticed, especially here in Los Angeles, is that if you look at the bench as a whole, it's almost like anything in life.  There's some judges who I would consider quite conservative and tough on crime, tough on sentencing and obviously, if you had your choice you probably wouldn't choose that judge.

While there's other judges that I would say are more liberal — more reasonable to deal with and more likely to be fair when it comes to a particular defendant's sentence.  Then there's those judges who kind of fall in the middle.  It even gets a little more complicated than that because I'm sure there's some judges who will be more harsh on certain offenses while being less harsh on other offenses.

So, your federal criminal defense attorney — and I think about this all the time — I've got to figure out what are the best arguments for my client?  What makes the most sense based on the circumstances that we find ourselves in.

Obviously, you want to use common sense arguments that somebody can relate to and say, okay that makes sense.  I'm going to take that into consideration versus no, that doesn't make sense.  Your client did X, Y and Z, so you saying that really seems to be ignoring the fact that they committed a very serious crime and really trying to down-play things.

Arguments to a Federal Judge That Make Sense

You're making a statement show usually remorse and that you realize the significance of the crime that you've committed and a lot of these crimes you realize how much you've impacted certain victims in the case.  If the judge feels like you really do not understand what you've done and that you may just do this again, then obviously they're going to want to punish you to really show you what happens if you do this type of activity again.

If on the other hand, the judge feels like this person really truly gets what they did was wrong, understands the implications of it, the impact of it, and is not going to do it again and has learned and has been punished to a degree by being arrested and all the bad things that come along with a federal criminal offense, then they're probably going to be more apt to be more reasonable with a particular defendant.

So, judges are crucial in federal criminal cases.  I talk about judges to my clients all the time.  I give them my insight having done criminal defense now for 26 years and we try to really come up with a good plan and a good strategy that makes sense depending on which judge we're dealing with, what the charges are and kind of what my client's criminal history is and where they stand related to the federal criminal case.