What most people don't realize is that a federal criminal money laundering case can take many different forms and it's a bit confusing because you look at the law on this subject and a lot of these websites are just spouting off a bunch of law without giving any explanation — without breathing any life into the subject matter — because people sometimes when they get arrested or indicted for money laundering they can't even figure out what they've done wrong.

Because if it's lawfully obtained, then what's the issue or problem.  So, the first thing they have to prove in order to get you for a money laundering case at the federal level is that whatever money, funds or credit line is illegally obtained.

Once they prove that, now they have to show — just so you understand the concept — you're basically trying to clean that money.  In other words, let's say that someone's got a huge drug enterprise and they're making thousands of dollars in that enterprise.

That's money laundering.  That's someone who is taking funds from an illegal enterprise and then they're putting that money into a business account and trying to clean it.  This is probably one of the most simplistic examples. 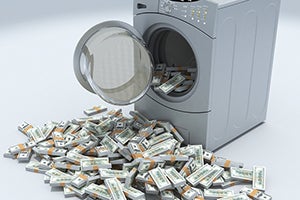 That's not the only example.  There's all kinds of examples of money being moved through an account and it's also at the international level where people are moving money.  It's at the domestic level and in both of these scenarios, someone can be charged with federal money laundering.

So, if you have a scenario where you're being charged with federal money laundering and you can't even figure out what you've done wrong, you have to get to a federal criminal defense attorney immediately.

Because sometimes the reason you can't figure out what you've done wrong is because you haven't done anything wrong.  If that's that circumstance — if the money you're receiving is not illegally obtained — that would be the first form of defense in order to block a federal money laundering allegation.

Sometimes in a money laundering case, getting your version of events gives you the ability to mitigate things — to lessen the charges.  Sometimes you can negotiate with the government on different levels that you wouldn't have even thought of once you get a good attorney involved who knows your story and can begin the process of helping you get the result you must have.