I call this the modern federal drug conspiracy because I've been doing drug conspiracy cases now for the last 26 years and I've seen them develop in a lot of different ways.

The federal government has to keep pace with those individuals who are moving drugs throughout not just California or the United States, but internationally.  There's a lot of drugs, and I've defended people who are alleged to be bringing drugs in from out of the country.

In order to track this type of movement and the sophisticated ways that drug traffickers use to be able to avoid police detection, the FBI, Secret Service, the DEA, Homeland Security, and all the various agencies at the federal level that deal with these federal drug conspiracy cases. See related – overview of federal conspiracy laws.

The feds have had to figure out what these guys are doing, and a lot of time they're tracking how they're communicating with each other.  It used to be text messaging, Blackberries.

Now they pretty much have used what they've always used which is the good old-fashion wire tap where people are stupid enough to be involved in big drug conspiracies at the federal level and they're using telephones to talk.

A lot of times they can even avoid detection on their own phone.  Maybe they get some sort of a burner phone to be involved with drugs being moved in order to avoid the police tracking their phone. 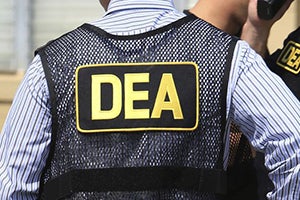 The problem is, the person that they're talking to may not be taking the same precautions that they are, so now you're talking to somebody who's phone's being tapped.

If they can identify who you are, who that person is they can prove that you're talking about moving drugs, maybe they can see some of the drugs that are purportedly being talked about.

In this manner, they can confirm that that was a drug transaction that was being talked about, even though nobody specifically mentions drugs or money, for example, they're on their way to be able to prosecute you as part of the cog in the new modern federal criminal drug conspiracy cases.

You've got to realize that.  The bad thing about that is you don't even have standing usually to challenge that listening the police are listening in on your conversation because it's not your phone that's being wire tapped.  You're talking to somebody else and their phone is being wire tapped.

A lot of times wire tap motions can be filed on behalf of criminal defendants at the federal level, basically arguing there's no way that law enforcement should have been able to get a judge to sign a wire tap warrant to be able to listen to their phone.

But if your phone is not even being tapped and you're just getting caught talking to somebody who's phone is tapped, then obviously that's just going to be too bad for you and whatever evidence they can gather from that conversation they're going to try to use against you.

So, that's one of the most powerful means that I still see being used at the federal level to catch people who are involved with what I'm calling this new modern federal drug conspiracy, and that is listening to their conversations.

Cooperators to Testify Against Other People

Another big way they catch people, and a very effective way, is using cooperators.  In other words, they're going to use people who are part of the conspiracy who know the people.

They're typically going to arrest those people and put them in a bad situation where those people caught for their own federal drug case, and now in order to get themselves out and not be facing many years in federal prison — sometimes a 10-year mandatory minimum.

They're going to get that person to give information about other people who are involved.  They're usually trying to go up the chain — catch people who are making the big money in these drug conspiracies — catch the suppliers.

So, they'll use this person that they caught and say, if you don't want to go to federal prison for 10, 20 or even life in prison if they have prior convictions, then you'd better cooperate with us.

So, cooperators are a huge source of intel gathering and they'll use these cooperators to testify against other people who haven't been caught yet.  Once they know they've got the cooperator locked in because if they don't testify they're looking at many years in prison, then they feel confident going after some of these people who have been able to insulate themselves better when it comes to a federal drug conspiracy.

So, you've got two big ways there that they're catching people.  The other way they're getting people is just good old-fashion investigation.  They'll go out and videotape people.  They'll take photographs of people.  Sometimes they'll catch people in the act.  They can catch three people in one felt swoop.

All they've got to do is get two people who they know who they are, talking about a drug transaction, then they go and they catch the person who's moving the drugs — the mule — and now they just got three people.

So, they've gotten very sophisticated and you're really playing Russian roulette when it comes to these federal drug conspiracies because so much is at stake and because the United States has a big interest to keep drugs from coming into their country.

So, if you or a loved one has one of these cases, I've seen the cases from 26 years ago all the way to the present — I know how to defend a modern drug conspiracy criminal case at the federal level.  Pick up the phone.  Make the call to our federal criminal defense lawyers and we'll start the process in getting your federal matter handled the best way possible.